In this video, Continuity Founding Partner Doug Baumoel shares 5 foundational concepts to help viewers better understand and manage the unique type of conflict that happens when families work and own together. This recent event was hosted by the Smith Family Business Initiative at Cornell University.

Watch this video and you’ll learn: 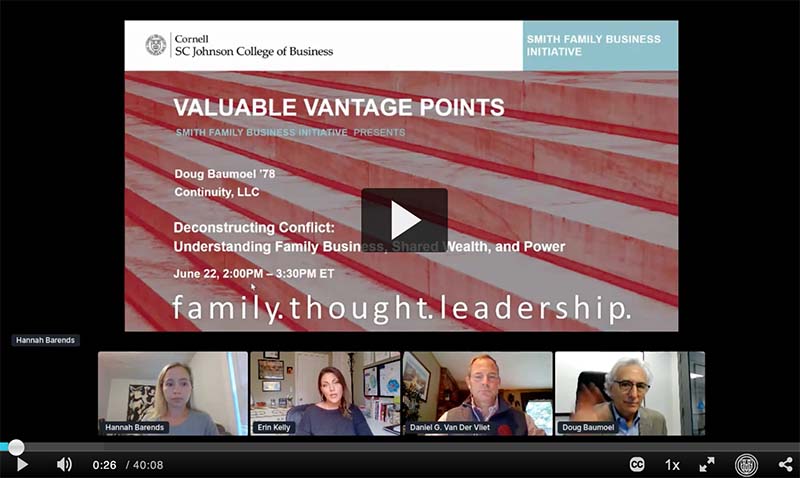 This video content is hosted by the Smith Family Business Initiative at Cornell University. Clicking will open a new tab in your browser for viewing, but this webpage will remain open for reference.

Wealth of Wisdom: Top Practices for Wealthy Families and Their Advisors

Significant family wealth brings many opportunities and benefits. At the same time, enterprising families face considerable challenges as they attempt to navigate financial and estate planning, succession, developing rising generation talent, and more. It is important for high-net-worth families to find and employ proven methods to help protect and improve their resources and family relationships over time.

In Wealth of Wisdom: Top Practices for Wealthy Families and Their Advisors, veteran family wealth practitioners and advisors Tom McCullough and Keith Whitaker have collected practical and hands-on tools, exercises, and activities for wealthy family members and the practitioners who advise them. Contained in 62 stand-alone chapters, written by leading family wealth advisors, these concrete strategies are designed to help families thoughtfully plan for their future, invest wisely, raise the next generation of family leaders, share decision making, and effectively connect with communities through philanthropy.

In this book, you will find templates, tools, and exercises you can apply immediately in your advisory practice or in your own family to determine legacy, identify core values, understand family complexity, and explore individual histories with money. This book offers a single, definitive source of actionable solutions from over 70 leaders in the field of family wealth advising.

Wealth of Wisdom: Top Practices for Wealthy Families and Their Advisors is an indispensable guide for wealthy families and the family offices, advisors, consultants, lawyers and accountants who work with them to help them achieve their goals.

Wealth of Wisdom: Top Practices for Wealthy Families and Their Advisors is a practical and hands-on toolkit containing exercises, techniques, templates, and strategies that can be immediately applied by wealthy families and their advisors to help protect and grow their financial resources and family relationships. The included tools encourage readers to think through and determine their highest priorities, plan thoughtfully for the future, invest their assets wisely, raise the next generation of family leaders, and more.

Exercises like the Family Self-Assessment Tool and the Family Money History Questionnaire reveal foundational and important truths about the structure and behavior of wealthy families, while techniques like the Core Values Exercise demonstrate where family priorities lie and how to make decisions as readers move into the future.

An indispensable guide for family office professionals and other practitioners who advise wealthy families as part of their practice—as well as members of high-net-worth families themselves—Wealth of Wisdom: Top Practices for Wealthy Families and Their Advisors is a one-stop, authoritative resource collected by two of the leading advisors and practitioners in family wealth today.

Mom Always Liked You Best – A Guide to Resolving Family Feuds, Inheritance Battles and Eldercare Crises is a practical guide for the millions of Americans currently struggling with adult family conflict. It is designed to give you the information and tools you need right now to achieve those mutual agreements that seem so elusive.

The authors have helped many such families who are in conflict around elder transitions and associated issues. They are “thought leaders” in the field of elder mediation and also bring decades of experience in the areas of education, finance, healthcare, social work, and estate settlement, as well as their own family experiences. By reading this step-by-step guide and practicing the techniques that they lay out for you, you will learn skills used by professionals. You will learn tools to help you stop having those circular arguments that go on interminably and get you nowhere.

Easy-to-read and filled with engaging examples, this guide can help you think like a mediator in order to become a better decision-maker, a more mindful negotiator, and a more effective communicator. It can help you to lead your own family members toward consensus around some of the most important decisions you will ever face together.

Family Business Abundance: How to Scale Your Company and Succeed Together Across Multiple Generations

For some, family business is the best way to become wealthy, to cultivate human capacity, and to make an impact on the world. It can be incredibly satisfying, and at times, even fun to work with the ones whom you love the most. Rewarding, satisfying, and sometimes even fun. But not easy.

In Family Business Abundance you’ll be introduced to successful multigenerational families, and a comprehensive management system you can employ to strengthen your family and business. The system consists of three mindsets and three building blocks. It will serve as a guide for current leaders, for the people with you today, and for future leaders, yet unborn, who will carry on your mission with purpose and gratitude in their hearts.

A critical resource for families managing significant wealth. Wealth of Wisdom offers essential guidance and tools to help high-net-worth families successfully manage significant wealth. By compiling the 50 most common questions surrounding protection and growth, this book provides a compendium of knowledge from experts around the globe and across disciplines, including contributions from Continuity’s own experts, Doug Baumoel and Blair Trippe.

Deep insight and thoughtful answers put an end to uncertainty, and help lay to rest the issues you have been wrestling with for years; by divulging central lessons and explaining practical actions you can take today, this book gives you the critical information you need to make more informed decisions about your financial legacy. Vital charts, graphics, questionnaires, worksheets and other tools help you get organised, develop a strategy and take real control of your family’s wealth, while case studies show how other families have handled the very dilemmas you may be facing today.

Managing significant wealth is a complex affair, and navigating the financial world at that level involves making decisions that can have major ramifications ― these are not decisions to make lightly. This book equips you to take positive action, be proactive and make the tough decisions to protect and grow your family’s wealth.

When your family’s wealth is at stake, knowledge is critical ― and uncertainty can be dangerous. Drawn from interactions with hundreds of wealthy individuals and families, Wealth of Wisdom provides a definitive resource of practical solutions from the world’s best financial minds.

by Doug Baumoel and Blair Trippe

Deconstructing Conflict looks at family business conflict, or conflict over shared wealth, as one example of a broader category of conflict: identity-based, systemic conflict among stakeholders who share important continuing relationships.

This acclaimed work draws upon nearly fifteen years of experience in which Baumoel and Trippe have helped scores of enterprising families navigate the challenges of owning and managing together as family.

Based upon their groundbreaking methodology known as “The Conflict Equation,” the book presents five foundational concepts to help readers deconstruct conflict into its component parts. It will help you understand the reasons that underlie all conflict, what triggers active conflict, and why conflict can be so extreme and intractable in family business systems.

This book will arm family business stakeholders and their advisors with the most cutting-edge thinking for achieving generational success in family enterprise.

With a Foreword by Tim Phillips – CEO and Co-Founder, Beyond Conflict.

Hear what Doug and Blair have to say about Deconstructing Conflict… in their own words.

Continuity Founding Partner Doug Baumoel discusses The Conflict Equation and why a mathematical tool is so effective in managing behavioral issues.

Continuity Managing Partner Blair Trippe outlines how enterprising families will benefit from reading and understanding the material in Deconstructing Conflict.