Understanding Conflict in Families of Wealth

Understanding Conflict in Families of Wealth

Everyone fights over what matters to them. When unrelated people fight, they can choose to walk away and end relationships. When family members fight, it’s not that easy. It’s more difficult to cut ties, since family relationships often continue even if affinity doesn’t.  Plus, when family members fight, they often are fighting over deeper, more personal concerns than just what issues lie at the core of their disagreement. They are also trying to figure out how they will continue as family in the future.

Given that conflict is likely unavoidable, how can you think through options to manage it well?

Disputes can be negotiated or mediated and resolved.

For example, an argument over distribution of inheritance quickly expands to include in-laws and becomes a challenge of values about wealth and property, beliefs about fairness, questions of love and loyalty, and opportunities to assert one’s identity.

Conflict cannot be “resolved;” conflict must be managed.

Conflict can be active (fighting) or passive (feeling stuck).  Everyone knows how active conflict feels and sounds. Passive conflict, or the fear of conflict, can be just as damaging and more insidious. Fear of conflict causes people to avoid making decisions together, leaving families and their enterprises stuck.  When families know that tensions and differences exist, rather than fighting they may simply avoid doing anything that could trigger active conflict. While this may seem like everyone getting along, it can be just as damaging to families as active conflict.

The Causes of Conflict in Families

Differences always exist between individuals; any time individuals interact, they will be doing so in the context of those differences.  Family members are interdependent with each other— in some families more than in others—increasing opportunities for individuals with different values and goals to interact.  The larger and more connected the family is, the greater the complexity, which makes conflict management more challenging.

Add to this a family business or shared family wealth and property, and the level of interdependence skyrockets, adding further complexity. When families share assets, family members often juggle several roles at the same time, which not only makes it challenging for them to manage their own motivations and concerns but also those of their siblings, parents and cousins.  Conflict arises when those differences impact decision making. When this is not managed well, conflict can be easily triggered.

Where There is Complexity, Things Go “Wrong”

In any complex machine with many interconnected, moving parts, something can go wrong.  A machine will break down or perform poorly when things go awry.  In a family—especially an enterprising family—conflict indicates that something is going wrong.  We are not implying any judgment when we say something is going “wrong.”  We are suggesting that something is happening in the system for which it is unprepared. Even in the most well-developed families with governance, constitutions and councils, unanticipated conflicts can occur.

Conflict is simply woven into the fabric of any highly interdependent system, and families—especially enterprising families—are no exception.

How Wealth Can Be a Disadvantage

Sometimes affluent families are at a disadvantage when conflict strikes.  When family members grow up with wealth, they may grow up with independence rather than interdependence.  Siblings who never had to fight over use of the family car in their youth, for example, may not have had the invaluable experience of managing conflict together.   In later life, they may find that they are more interdependent than they were when they were younger.  They may be co-beneficiaries, employees of their family enterprise, or they may share ownership of real estate.  While independence in their youth helped them avoid conflict, it may also have kept them from building an important skill.

The role of the peacemaker in a family is fraught.  Despite best intentions and, often, great skill, every family member has a stake in the outcome of a conflict.  This compromises their ability to be truly neutral and unbiased.  Of course there are exceptions, but as a rule, it’s difficult to manage conflict when you are one of the participants / part of the “problem” itself.

This doesn’t mean all conflicts require outside facilitation.  Family members in conflict can educate themselves on dispute resolution techniques, communication practice, family systems theory and the substantive issues at play. They can engage directly in negotiation and solution building.  While there are benefits to having a trained, outside professional conflict manager, engaging directly in a thoughtful manner can be very effective.

It is important, though, to recognize the difference between a dispute and conflict. Dispute resolution techniques won’t address conflict—only a dispute. A family fight is rarely a simple dispute, especially in families of wealth in which there is a high degree of interdependence.

More likely, there are identity issues involving values, beliefs, personal experiences and personalities at play. There are non-negotiable issues involved that won’t respond to force and bargaining and trying to approach them as disputes can make matters worse.

A more in-depth version of this piece appears in the book Wealth of Wisdom: 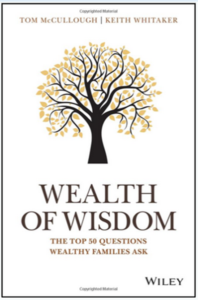 The full chapter explores this topic further and covers:

Continuity Founding Partner Doug Baumoel also authored a chapter in the book, exploring how to decide whether or not to separate as a family.